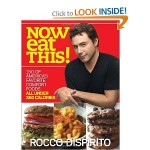 So you spent the entire winter on hibernation from exercise, huh? Put on a few pounds, or maybe you just want to get fit for the summer! The only problem is diets are restrictive, weight loss food tastes like cardboard, and all the good stuff has tons of calories. Well I’m here to tell you that by making little changes in your diet, you can slowly whittle your waist line and still eat the foods you love! By substituting certain things or not doing some things you can cut some of the calories in the foods you adore, thereby, still enjoying that mocha double fudge brownie that you snuck out from the kitchen in the middle of the night!

Everyday Calorie Savers. Rocco DiSpirito, author of the book “Now Eat This” says that little changes impact your weight in a

big way! Instead of using butter use real fruit jam. Have a baked potato instead of the fries, or instead of drinking sugar laden orange juice, just eat the orange instead. Removing the skin from chicken breast or dabbing your pizza with a napkin before you bite into it can save you at least 100 calories at a time! WOW!

It’s In the Drinks. Of course you hear how alcohol and soda have fattening qualities, but what about the harmless things such as tea? Unsweetened tea has zero calories, sweet tea, however, has a ton of them! Most people don’t realize how often they are drinking their calories. They have these elaborate healthy meals, but trade off with soda or sugary fruit juice. It’s not your entire fault.  David Zinczenko and Matt Goulding, co-authors of “Eat This, Not That” state that advertising plays a large role in what we think is healthy. Think that Vitamin Water is good for you?  It’s not the worst you can do, but the minor amount of vitamins in one of those drinks is completely obliterated by the sugar that keeps you from tasting those vitamins. They aren’t saying not to have your favorite drink, but don’t make it your main source of liquid throughout the day. Water is your best bet… unless it’s from a radioactive fountain and that’s a whole other set of problems… WAH!

Meat Eaters. Are you a meat eater who’s tired of chicken every day? You too can expand on your meat selections at dinner time! You just have to be smart about what you pick up at the grocery store. Instead of fattier cuts of meat like prime rib, choose beef round, sirloin tips, or tenderloin. Instead of pork chops from the shoulder, try the ones that are lean pork loin. Instead of regular bacon, look for Canadian or Turkey Bacon. By studying the cuts of meat you get at the store, you can shrink the amount of calories at the base of your recipe! STUDY!

Sauces, Gravies and Condiments. Who doesn’t love barbecue sauce? You don’t have to lie about wanting the cook to ladle extra gravy on your mashed potatoes. Waiter, you forgot the cream gravy for my chicken fried steak. Ketchup anyone?  Realistically, you aren’t going to omit these things from your meal. Ideally by doing that, you could slash up to 150 calories per meal, but realistically, that sauce isn’t going anywhere. We are here to tell you that you don’t have to suffer without them! Use skim milk when making the cream gravy. Buy ketchup that’s organic, and not all barbeque sauce has to have its own weight in brown sugar. Don’t skip these things, cause you’ll feel deprived, just modify them or just use half the amount you normally would. Even by using less, you’ve cut calories and still gotten the taste of things you love. YES LESS!

Pasta. Once upon a time, whole wheat pasta used to be more expensive then regular pasta. That is no longer true. Large chain stores like Walmart are doing their best to make healthier food options more affordable for everyday people. Try pastas made from whole grain or maybe a lower carb version of your favorite linguine. Not only will they taste just as fantastic, they will add color to your table. They have pastas made from brown rice, vegetables, corn, you name it! There are literally hundreds of things that you can do with pasta and no limit to the things you can add to them to make a healthy meal! YUMMY! 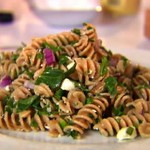 Veggies. It can be hard to get your full servings of fruit and veggies for the day. We are here to tell you that you just have to be sneaky about how you do it. Grab an apple for a snack instead of that candy bar. Keep a banana in your bag instead of that commercial granola bar.  Cut up celery, carrots, or any other vegetable and munch on that while watching your movies. And the number 1# sneaky way of getting your leafy greens…. Use less meat. I know it sounds like a pain, but by using more vegetables in your meals, you cannot only cut some of the calories, but you can also slice the price of the meal. Making chili? Throw in some corn! Why not add broccoli to that wheat pasta dish you just made.  Throw some more carrots into that stew! By adding vegetables into your normal dinner fare, you’re sneaking nutrition into your day without even trying! GREAT!

No one is telling you that you can’t have the things you love. If you really feel a craving for that item, then don’t hesitate; don’t have any regrets, but if you are noshing on something just because you love the taste of it, a little substituting can make that favorite food not only taste good, but good for you! GOOD LUCK! 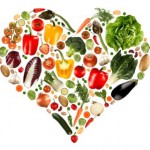