The essence of the articles I write deal solely with life lessons, oftentimes my own, but also the life lessons of others. It is said that with age comes wisdom. Hopefully, the tidbit of wisdom I am about to share will help someone to make a better decision about their future, especially in the workplace.

You see, the job market world is rapidly changing. The needs of the employer from a prospective employee are also a part of this metamorphosis. Just recently, I heard on the evening news that a well-known, high-end retailer is requiring their employees to wear the same brand, color and make of shirt as well as the same brand, type and color of underwear and pants. When the temperature hits a paltry 60 degrees, they are required to wear the same type and brand of overcoat buttoned-down to the fourth button, with the last one open. Identical hats are to be worn on the same day, with the brim at a certain angle. Sounds a bit excessive, doesn’t it?

Well, this is the new world order of business. As you see, employers are becoming more conservative by the day. This article takes a look at one big issue facing many employers today that has found a re-birth in today’s world — tattoos.

While watching a recent NFL game (the name of the team escapes me at the moment), I noticed that one of the players had (what I thought at the time) an ugly rash on his arm. Of course, I had to step a little closer to the television and my husband explained to me that it wasn’t a rash, but a tattoo! Upon further investigation, I noticed how this very massive tattoo crept eerily from his bulging arms all the way up his back to his neck! At first, I could not encompass what pain this man must have gone through. But I had another issue I could not encompass and this is…Why? And every time I see one, I still ask that same question. So, let’s take a look at the issue of tattoos or as the title says, The Perception of Tattoos!

Did you know that the word “tattoo” comes from the Tahitian word “tattau” which means to “mark” and at one time, was a draw for freak circuses and fairs in the 18th and 19th centuries? Evidence from ancient Egypt, Greenland, Siberia and New Zealand reveals that the art of tattooing is truly global and has existed for thousands of years.

Tattooing was often seen as a symbol status, as a mark of a person’s passage through life; and often, as a way of beautifying the body. Westerners, though, have regarded the practice as repulsive and slightly frightening. In tribal cultures, tattoos held even greater meaning. A tattoo increased one’s marriage potentiality, denoted a specific skill for the tribe, or symbolized greatness in rank as a warrior. Tattoos were worn to identify a religious sect, to symbolize a proud family crest, or as a form of self-expression and solidarity with some idea. Tattoos were often worn by tribal units to ward off illnesses.

Today actors and athletes wear them like you would wear a sweater. Then, they realize the error of their sometimes irrational decision to get a tattoo. But, the good news is they have the money needed to remove the mistake of tattooing in order to correct a bad decision.

There are probably more cons than pros in the art of tattooing. First of all, the markings are permanent! The marks and colors of a tattoo will remain on your skin forever, and forever can be a long time.

You need to understand that the skin’s subtle elasticity does not last. As we age, the depletion of elasticity causes the skin to sag. Here’s an experiment. Inflate a balloon. Write your name on it and even add a drawing and a little color. Slowly release the air so you can see just how your skin will look with a tattoo as you gradually get older. If you smoke, get a lot of exposure to the sun, or maybe not on the healthiest diet, the sagging process is sped up tremendously. So keep in mind, you are stuck with this mark until you depart this world. It’s just like cutting off your arm. Once it’s done, it’s done!

Remember those actors and athletes I referred to earlier? They can afford the creams and lotions to improve the elasticity of the skin and they can afford the expensive and painful treatment needed to remove the tattoos.

Here is something else you probably did not consider: the health risks. Ever heard of HIV/Aids? Ever had a bacterial infection or MRSA? What about hepatitis? Allergic reactions to the dye or ink used in tattooing is more common than you think. What about unsterile needles? Did you ever stop to think about the cleanliness of the tattoo shop? Is the tattooist following the strict regulations? Is the tattooist experienced?

In the December 2012 issue of ShopSmart Magazine titled “Bad Tattoo News,” it is revealed that one in five adults have at least one tattoo, according to a 2012 Harris Poll. Most say that they don’t regret the decision. However, 14% also reportedly regret the body ink and realize that they will have a harder time getting rid of the tattoo than they originally thought. The article goes further and reveals that if tattoos are older than three years of if they are green or yellow, of if you smoke and they are located on your legs or feet, you may be in trouble. It reportedly takes 15 (long and expensive) sessions to remove the ink! You are at higher risk for infections, hepatitis, HIV and other allergic reactions. Just make sure that you stay safe. You may not have considered in addition that your poor judgment could cost you a job. You are never fully aware of the biases and prejudices of an employer. Ask yourself what lasting impact will the decision to get a tattoo have on your financial future? Is it a vice of necessity or are you just following a fad? Is this a true form of self-expression? Will this decision help you to improve on how others view you?

In an interview recently conducted with Chef Sheri Yearby, Culinary Arts Instructor and Chef (November 12, 2012), she states the following about the issue of tattoos in the workplace. 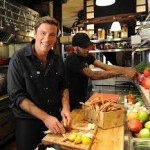 “…This has always been an interesting topic for me. I am becoming more aware of how disruptive tattoos can be sometimes. Tattoos can be a huge source of distraction for customers and employees. Depending upon the nature of the tattoo, there can be very negative meanings that could possibly offend patrons and co-workers. In the educational area, for example, tattoos must be covered. In the food industry, however, views are becoming more lenient due to the fact that a number of people have tattoos on their wrists and hands which would be difficult to cover during food preparation. So, when rules as to employees’ duties and responsibilities come into play, it is necessary to minimize their exposure to patrons. For example, it might be wise to delegate one’s duties to the back of the house. This can, then, pose an issue of fairness when employees are required to cross-train in all areas and rotate duties. The other area of concern is health. Sometimes, a person can be exposed to hepatitis through obtaining a tattoo from a source who is not reputable. The result is increased risk of exposure of hepatitis to customers and other employees. Of course, the decision is solely left up to the employer. Some companies have stricter hiring criteria than others. As a Chef and Culinary Instructor, I always encourage students to cover their tattoos completely when interviewing for a job. Remember, first impressions are lasting!”…

Here is where wisdom comes into play. Sometimes, what looks good to you, may not be good FOR you! If you are seeking a job with a great employer, you must possess the wisdom to realize that employers are indeed getting more conservative about the way you dress, your skill set, your overall persona and what you say on social media. So, take this little tidbit of wisdom with you to the door of that tattoo shop.

History may repeat itself,

Fashions may come and go (and come back again),

But, a tattoo is forever!

Livestrong.com “The Limitless Potential of You”

Pros and Cons of Tattoos